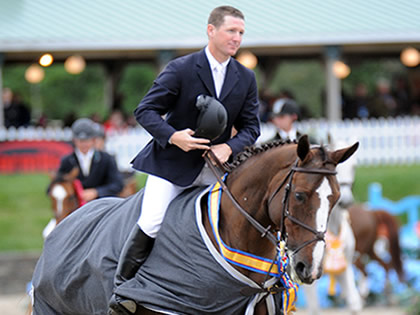 McLain's father, Barney, competed in and won the Grand Prix of Devon in 1982, 20 years to the day before his son won the same competition in 2002.

At the 2004 Olympic Games in Athens, Ward won the gold medal as part of the United States team in Team jumping, together with Peter Wylde, Beezie Madden, and Chris Kappler.

At the 2012 Olympics in London, Ward rode for the USA Olympic Equestrian team and at the 2016 Summer Olympics, Ward again rode for the U.S. Team. His mount was HH Azur, who at the time of the Olympics was 10. He earned a team silver medal, and placed 9th individually. He had near perfect rounds all week, dropping only one rail all week.

In 2017 McLain won the Longines FEI World Cup Championship. It was his 17 appearance at the final. The highest he had placed up till now was 2nd in 2009. He won riding his 2016 Olympic mount HH Azur, an 11 year old mare. He completed the week with no penalties after five rounds of jumping.